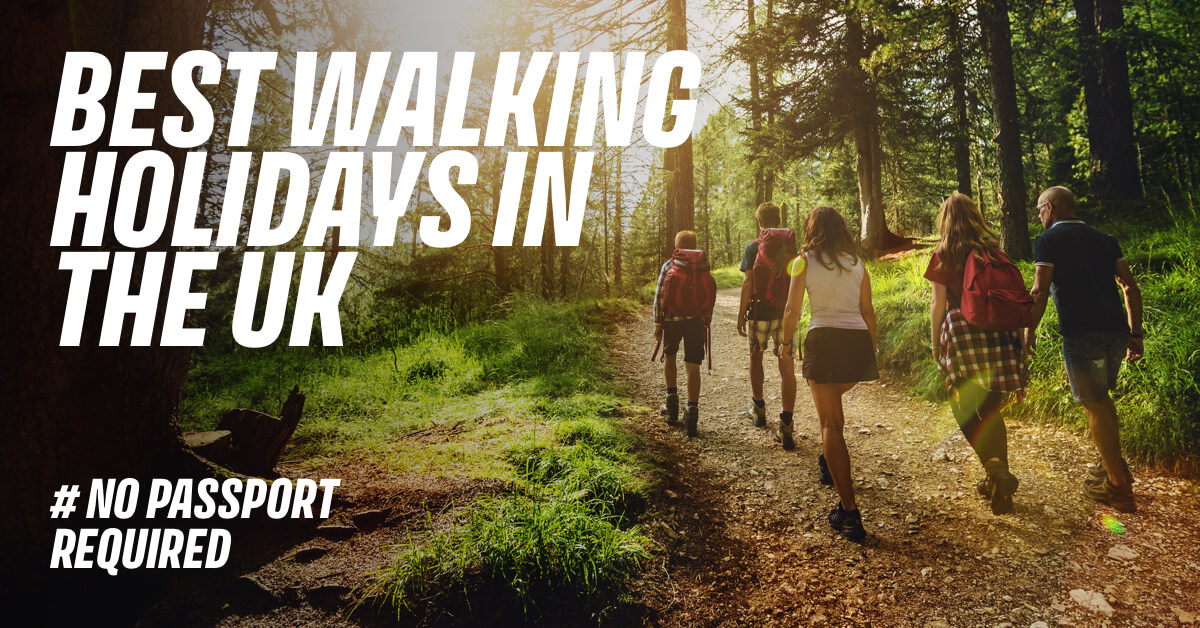 Best Walking Holidays in the UK

2020 is the year of the staycation. So how will you be spending yours?

The United Kingdom might not be the holiday destination you had in mind, but it does have something unique to offer those who like to explore.

From its rolling countryside, staggering mountain ranges to its dramatic coastline, there is something for everyone to enjoy. And what's one of the best ways to appreciate what the UK has to offer?

By foot, of course.

A walking holiday is a perfect way to relax and forget all your worries. So get your walking boots at the ready, we're about to share some of the best walking holidays in the UK!

Founded by the great Alfred Wainwright, the Coast to Coast route will take you on an epic journey through craggy fells, untamed moorland and open fields.

Starting in St Bees in Cumbria, you'll enjoy the breathtaking scenery of Wainwright's beloved Lake District National Park and finish at the picturesque fishing village of Robin Hood's Bay in North Yorkshire. A word of warning though; the Coast to Coast is best tackled by experienced walkers, as some of the rugged paths in the heart of the Lakes can be a little challenging.

It can take between 12-15 days to complete the route if you walk every day. However, most people choose to take rest days to explore the quaint locations along the way such as Grasmere, Coniston and Borrowdale. There's plenty of lovely little cafes you can visit for a cuppa' tea and a slice of cake.

High-up and often away from everyday life, you'll follow the hills of the Derbyshire Peak District and the Yorkshire Dales before exploring the impressive Swaledale Valley. You'll trek through the North Pennines where you will hop over Hadrian's Wall in Northumberland. After admiring the Cheviot Hills, the route ends in Kirk Yetholm on the Scottish Borders.

If you were to walk the whole of the Pennine Way, it could take you up to three weeks to complete depending on how often you decide to stop. Most people do take rest days as there are lots of lovely places to stop and admire, such as Hebden Bridge, Skipton, Hawes and Appleby.

There's nothing like a bit of sea air to clear the mind. With its glorious dunes, wide sweeping beaches and rocky headlands, this spectacular coastline in the North of England is a treat. Cresswell is the starting point of the trail, and you'll follow the coast for a majority of the time. The path does wind inland in some places though, such as Belford and Holy Island.

The route itself is mostly flat, but it does have one or two steep climbs. It consists of footpaths, bridleways, beeches and minor roads and is also easy to follow. From charming coastal villages and historic castles to a brilliant variety of wildlife, there's plenty to admire along the way.

The Northumberland Coast Path usually takes three days to complete, so it's a great option if you want a short walking break.

With its white chalk cliffs, fossil-rich coves and peaceful estuaries, the circular trail around the Isle of Wight is the best way to explore the beauty that the island has to offer. You'll mostly follow public footpaths and minor lanes, although some sections follow roads. The overall route consists of six distinctive sections, so the beginning and endpoints can vary.

Along the way, there's plenty to see. Take a moment to admire the boundless views at Culver Down. Keep an eye out for the remarkable wildlife too, as the Isle of Wight is rich with bird and plant life. If you're lucky, you might even spot the Glanville Fritillary butterfly, which you won't find anywhere else in Great Britain.

If you love delving into history, you'll enjoy a visit to Osborne House, the former residence of Queen Victoria, as well as visiting the well-preserved Carisbrooke Castle.

The Isle of Wight Coastal Path takes roughly four days to complete if you're up for a challenge. However, most people choose to split up the route into sections over a week or more. That will give you plenty of time to visit the charming pubs and cafes and explore the island.

The Pembrokeshire Coastal Path is a magical long-distance walk that journeys past sheltered coves and rugged beaches. As you amble along the coastline, you might spot seals, dolphins and unusual species of seabird overhead.

When it comes to difficulty, the route is challenging. While it's gentle in some places, it is mostly cliff top walks. There are plenty of ups and downs along the way. The total rise and fall over the entire length of the path are approximately 35,000 feet, which is as high as Mount Everest!

If you were aiming to complete the Pembrokeshire Coastal Path in the shortest time frame, it would take between 10 to 15 days walking consecutively. Most people plan rest days at places like St. David's, the UK's smallest city. Or Skomer Island, where you'll find puffin colonies during the Spring and Summer months.

The Loch Lomond & Cowal Way is an unspoiled walking route that runs the length of the Cowal Peninsula, with half of it located within the Loch Lomond & Trossachs National Park.

Another name for this popular route is 'Scotland in 57 miles,' because it offers so much variety when it comes to scenery. You will pass through five small villages as you make your way towards Loch Lomond, so be sure to stop and admire Tighnabruaich, Glendaruel, Strachur, Lochgoilhead, and Arrochar. Wild forests, mountains, glens and lochs, there is plenty to explore. At one point, you can even catch sight of the Clyde coastline.

The route is signposted well. However, the difficulty level of this walk varies as it includes paths, beaches, forest roads, hill climbs and minor roads. Overall, it is still a rugged route, and you should be aware that you will have to cross several exposed passes. Some sections of the walk can be boggy underfoot, as you might expect with Scotland's weather.

The Norfolk Coastal Path runs from Hunstanton in west Norfolk to Hopton-on-Sea, situated on the southeast Norfolk coast. There is plenty for you to see on this glorious route, as it is in an area of outstanding natural beauty.

Admire the red and white chalk cliffs as you leave Hunstanton. Take a walk along the Blue Flag white sandy beaches and explore the quaint seaside towns and villages. You'll also pass through nature reserves, so keep your eyes open for the tidal marshes that are teeming with wildlife. The Norfolk Coastal Path will also take you on a journey through leafy pine woodlands.

Walking from Hunstanton to Hopton-on-Sea will take you 3-5 days but, you can easily pick up the route and walk a distance that suits you if you'd prefer a shorter walk.

If you're thinking about booking a walking holiday, you might want to consider a guided walking holiday. There are plenty of great providers to choose from, and they take care of all the logistics for you.

However, if you'd prefer a self-guided walking holiday, many B&B's and youth hostels near to popular walking routes will provide luggage transfers for you. Start planning your walking holiday today!

Planning other outdoor activities this year? Check out our range of towbars and bike racks and plan your next adventure.

​How High Should a Bike Seat be?

Just like people, bikes come in all shapes and sizes. Everyone has different comfort levels when they are cycling but depending on what type of bike you are riding and how tall you are, there is always an optimum seat height. So, whether it is comfort or performance you are looking for when you c...