Can You Tow With An Electric Car?

Electric cars are known to be extremely powerful. With instant torque from a standstill, most have the capacity to tow anything, from trailers all the way to caravans. But whilst they may have the necessary power, only a certain number of electric cars have actually been homologated to tow.

If you are unsure what the rules are when it comes to towing with electric cars, or if your current electric vehicle is suitable for towing, this blog will provide you with the information you need. Keep reading to find out the most popular electric towing cars of 2022.

This blog will cover the following:

Can all electric cars tow?

The short answer is no. The reason for this is that towing is not something that the majority of electric cars are designed to do. A huge selling point of some electric cars, compared to others, is the distance the car can travel on a fully charged battery. If an electric car is approved for towing, the range and efficiency of the car would be drastically reduced which can be seen as bad press in the world of synthetic motors. Electric cars are also typically heavier than petrol cars due to the chunky batteries that replace the petrol engine. So, the extra weight of a caravan on the back can be thought of as unsafe travelling at certain speeds.

Having said that, there still is a plethora of electric cars that are approved for towing, which can be fitted with a towbar for your hauling pleasure.

What are the rules for towing with an electric car?

Electric vehicles generally make fantastic towing vehicles. They have the torque and the stability in their weight. But, attaching a heavy trailer can dramatically affect the car's aerodynamics and can impact the range of the vehicle on a full battery.

As long as your electric vehicle has been homologated to tow, and what you're towing does not go over the towing capacity of the vehicle, you can pretty much tow anything!

If you're wondering what exactly to use to tow behind your vehicle, here are a few options:

A-frames can be used for a variety of different things, including the transportation of other vehicles and large loads.

Two-wheeled dollies are handy for towing other cars that have broken down or are unable to drive. With this type of dolly, one set of the car's tires, front or rear, is on the ground, while the other end is suspended on the dolly.

As long as your trailer's contents does not go over the towing capacity of your electric vehicle, you can use a trailer to lug almost anything!

Caravans are handy for stopping and staying almost anywhere, but make sure that your electric car is capable of towing your caravan, and it doesn't weigh more than the MAM (maximum authorised mass)

The idea of gliding through the countryside in near silence with a caravan in tow sounds like the makings of a very relaxing holiday. Whilst some electric cars aren't made with towing in mind, there are plenty of electric cars that are. But which electric cars can do the job? Here is a list of some most popular electric cars that have been type-approved to tow. 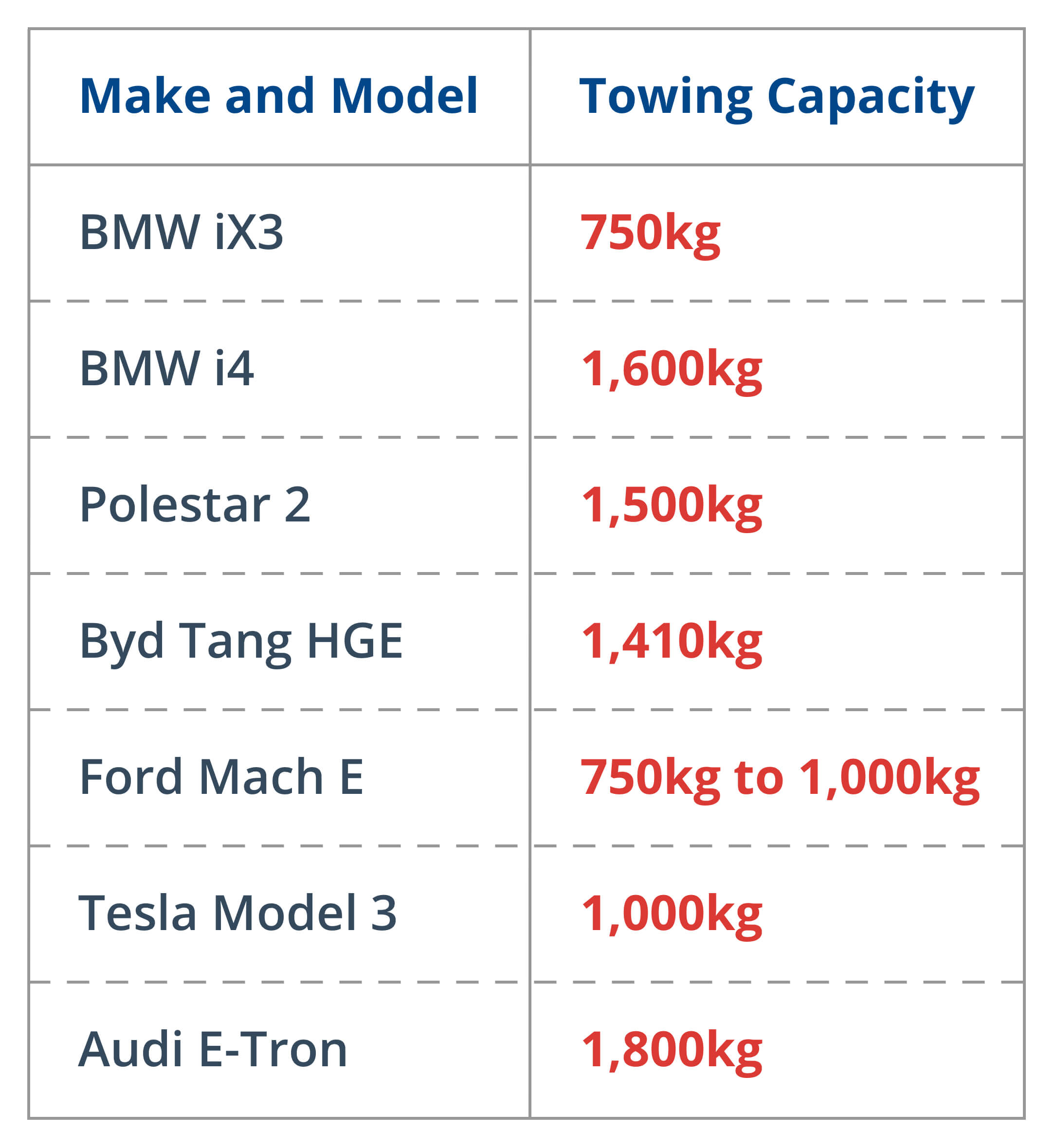 We supply towbars for all of the vehicles listed above. Find a towbar for your electric car now.

Which towbars can I use on my electric car?

We sell a range of Towbars that are suitable for use on electric cars. Our towbars differ in look and versatility and the range consists of the following:

Fixed Flange: This towbar is permanently attached and is ideal for serious towing, including caravans and boats.

Detachable Flange: This towbar is just as robust as the fixed flange, but the detachable flange comes with the added benefit of being removable. This is perfect for if you want to keep the original aesthetic of your electric car.

Fixed Swan Neck: This towbar has a sleeker design than the flange, but does the same job.

Detachable Swan Neck: This towbar has the same visuals as the fixed swan, but is also detachable, helping you keep the original look of the car.

Retractable Towbar: This towbar is permanently attached, but is ideal for owners of electric cars that want to keep the car's original visuals. This towbar can be folded away out of sight and used when you need it.

Check out our range of towbars now and see what works for your electric car.

So, if you're all ready to get your electric car on the road, it's time to explore! As long as everything is carefully loaded, and is secure in place, you should have no problem!