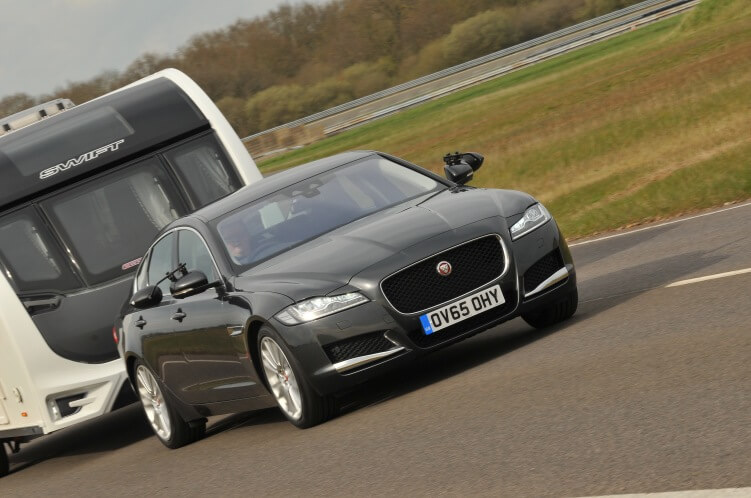 Looking to buy the best tow car for your caravan? Talk about a tough subject. First you need to find your maximum tow weight, then you need to assess your tow ball nose load and do you even know what kerb weight stands for? Didn't think so!

If you are having trouble with the technicalities of towing, then you will be delighted to hear that Witter-Towbars has once again been a valued partner of the 2016 Tow Car Awards. Testing over 41 cars in a variety of towing classes, the hard work of judging which tow car is right for your towing requirements has never been easier.

As usual our job at the awards was assessing the towing gear and electrics of every car; ensuring each towbar can handle the tough manoeuvres and demanding tests the drivers put them through.

So, considering every weight, petrol type and shape, say hello to the best tow cars of 2016 and what the judges thought about them.

The 1400kg class is one of the toughest categories in the tow car awards, but it is a sure bet if you're looking for a few surprises. Pitting a range of small vehicles head-to-head, this year's 1400kg class had some tough opposition with the 2015 winner Skoda Octavia returning to make another bid for the crown.

Unfortunately there could only be one winner and although we saw some top performances by the Mazda CX-3 and the Suzuki Vitara, it was the Honda HR-V who performed above the rest.

Holding its own in all of the track's tests, the 1.6 litre engine could easily get the HR-V up to speed with a time of 16.8 seconds in our 30mph to 60mph test. In terms of safety, with its dynamic design, the Honda HR-V performed in a league of its own; remaining stable and controlled in even the most dangerous of violent lane change tests.

Ok so you know that the Honda is safe and reliable, but how does it perform in day–to- day driving when you're not hooked up to a caravan? Well, it's not a Ferrari so kerb appeal isn't the defining feature, but we do think this is one of the better looking tow cars in the 1400kg class. In terms of practicality, the HR-V must have been designed by budding caravan enthusiasts as the rear seats have a clever upward folding design, enabling users to create two perfect luggage compartments.

Overall when it comes to picking the best tow car for your caravan, the deciding factor won't be the folding seats or cabin design; you want to know if the car can get you and your family safely from A to B, and we believe that the Honda is the up to 1400kg car for the job.

If there was one category which easily had the most talent, it would have to be the second weight class. Making up to 60% of tow cars on the market, in order to make even the final eight in the 1400kg to 1549kg class, car manufacturers really had to be at the top of their game with the aspect of safety when towing at the front of their mind.

As for the winner, there was once again only one real contender. Skoda have a history of dominating tow car awards and it is no surprise they've taken this award. Representing the very definition of a tow car, the Skoda Superb Hatch topped the class with a performance of excellence in the violent lane change tests. Even at a top speed of 70mph with a cross wind, the Skoda stuck to its line and didn't show any sign of weakness. As for getting you from A-B in good time the Superb is certainly no slouch. Picking up a time of 13.8 seconds in our 30mph to 60mph speed test, the Skoda's 2.0 litre Diesel Engine is packing a lot of pulling power.

Although it put in a performance of excellence in the track test it was the Skoda's performance off the track that decided the winner for the judges. Costing only £22,500 for a brand new model, there was only a couple of cars cheaper across all categories. For the judges this price offered superb (no pun intended) value for money for the average family - especially when you contemplated the amount of space on offer with this design.

Overall 2016 has been an excellent year for the 1400-1549kg class as there are plenty of excellent options on market that offer controlled design to keep you safe. But if you want a car that shows only strength in even the most white-knuckle of scenarios and matches that with quaint, stylish design then there really is only one winner; the Skoda Superb Hatch.

Moving on up in weight categories this is where you're expecting the cars to cost a lot more and put on a performance to match. With entries from Skoda, Volkswagen and Ford in this year's 1550kg to 1699kg class, this was the toughest competition we had ever seen and picking a winner pre-test was almost impossible.

Fortunately the tests split the men from the boys in this class and it was surprisingly the Jaguar XF which easily stole the show. Winning top praise from all the judges in the violent lane change tests, the Jaguar stuck to the track and showed no weakness under even the toughest of high speed manoeuvres. As for speed, the Jaguar is definitely one the hottest off the mark and managed to set a record breaking time of 11.8 seconds in the 30mph to 60mph speed test.

In terms of the Jaguar is also definitely one of the sexier cars on the track and backs this up with a spacious well designed cabin. Perfect for the family who want a practical tow car that offers and pizazz for the day-to-day driving experience.

Overall you won't find a much better tow car on the market than the Jaguar XF. It holds its own in terms of safety and as you're buying a Jaguar you are expecting a top looking car to match.

Time for the heavyweights. As usual in this class we are always expecting big results. Packing more power, a high max towing weight and higher price listings, manufacturers need to be at the forefront of intelligent engineering to win this category. As the competition entries came in, it was the big 3.0 litre Audi Avant and the bargain of SsangYong Korando that were hot favourites to take the 1700 to 1899kg class.

But, as often can happen at the tow car awards, we were left stunned as the updated Land Rover Discovery, with a brand new Ingenium engine, swept all the top points with the judges.

As for and design, the family will love the Discovery. Taking on much of the design of its older, bigger brother, the Land Rover Discovery Sport has a certain kerb appeal our judges loved. Inside of the car you will love the leather seats and spacious design. Easily fitting all your luggage or up to seven passengers, the Discovery Sport is a people carrier without the dire design.

After failing to win by a matter of points in the 2015 tow car awards we are happy that a few simple improvements made by Land Rover allows us to make the improved 2016 Discovery Sport edition the 1700-1899kg category winner. The kids will love the stylish design and you will love knowing that you're driving one of safest and capable tow cars on the market.

Looking at the big heavy weight categories there is very little that can surprise us. With seven award winning years in a row behind them, it was expected that the Land Rover Discovery 3.0 SDV6 Graphite would win this class.

Putting on a near flawless performance, the Land Rover offers the ultimate control in the violent lane change tests, breezing through any of the high speed manoeuvres the drivers threw at them. As for speed the Land Rover's beast of a 3.0 Litre engine puts out an impressive time of 10.4 seconds in our 30-60mph tests.

In terms of I'm sure we are all well acquainted with the famous design of the Land Rover and who doesn't love the look and feel of the biggest car on the road?

Overall the heavyweights offered some great choices, with the Audi Q7 and Mercedes GLS as great tow car options for those who just can't stomach the price of a Land Rover. Yet none of them could quite match the performance of the 3.0 engine or the that comes with it.

The petrol tow car category has to be a favourite of the guys here at Witter. Offering us the chance to get hands on with some of the most powerful engines in the tow car industry, this year's petrol competitors were out for the record books.

With submissions from the likes of Jaguar, Range Rover and Volkswagen the quality of car engineering on offer in this category was on another level and finding a winner was going to be tough. But as is often demonstrated at the tow car awards building the perfect petrol tow car takes experience, and so for the second year in a row the performance of a Ford Mondeo took the class.

So what makes the Ford a worthy winner? Well, the powerful engine smashed the Tow Car of the Year speed tests taking only 9.2 seconds to accelerate from 30mph to 60mph. As for safety, the judges tried to expose every possible weakness in the violent lane change tests but even at speeds of 70mph the Mondeo responded in a calm and stable manner.

As for and design, Mondeos are a long time British family favourite and with Ford managing to take the original Mondeo design and steadily evolve it with the times, we have no doubt that this will be a 2016 favourite of every budding caravan enthusiast.

Concerned about the environment? Fed up of rising petrol prices? Or maybe you're just worried about spending a fortune towing a caravan? Either way there are certainly very good reasons to consider a green tow car. Unfortunately balancing safety, power and a reasonable MPG rate while towing a caravan isn't always the easiest of tasks.

While the winning options of the Honda HR-V and the Skoda Octavia did seem to tick the green boxes, it was the Kia Cee'd that came out on top in the green category.

Offering an inviting 31.6mpg at a listing price of £19,895, the Cee'd was one of the cheapest and economical cars tested at the tow car awards.

Unfortunately, compared to some of our other category winners, the Kia didn't win praise from all the judges. While it did perform well at speeds of 60, any faster and there was slight movement from the caravan. Other issues which the judges found were that the conventional handbrake had to be pulled very firmly before the car would stick and at 16.4 seconds from 30mph to 60mph the car was a tad on the slow side.

Overall while the Cee'd did show some slight issues, when driven at the legal limit, this tow car is well-within what you would call safe. Add to that a fair listing price at a fantastic 31.6mpg and you have yourself a Green Car of the Year.

We hope you are all ready and set for some towing this Bank Holiday weekend, if there is anything you still need be sure to get the most out of our next day delivery and get your orders in on or before 2:30pm on Thursday 23rd May!